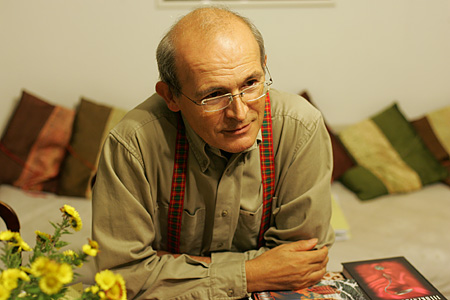 I was born in 1950. I studied at Budapest University of Technology, Faculty of Mechanical Engineering,

Engine Branch. I got my degree there in 1974. At the university I mostly dealt with heat and general energy transmissions. Later, I continued researching this field of science at my first workplace, the Department of Nuclear Techniques of Central Research Institute for Physics of Hungarian Academy of Sciences. Here my main area of research was the energy transmissions that can occur during possible nuclear power plant accidents.

In 1982 I got my Ph.D. in Engineering Science of Heat at Budapest University of Technology.

In 1980-81, by gaining scholarship from the International Atomic Energy Agency, I worked one and a half years in the United States, at the Brookhaven National Laboratory where I researched the stream patterns of nuclear power plants. Later many publications on this work were issued.

This was the place where, in my free time, I first read about anomalies such as healing by laying on of hands. I soon became interested in examining these unknown phenomena objectively using the tools and possibilities of the science. After getting home from the States and looking through the relevant scientific literature, I decided to try to create a kind of measurement that is suitable to prove the existence of the so-called bioenergy or life energy. (As in those times researching paranormal phenomena was considered as a “forbidden” area of science first I started by investigating the ball lightning. Ball lightning is a phenomenon of nature that, based on observations, causes anomalies similar to those caused by bioenergy. I published my observations and my theory on the nature of ball lightning in my book titled “Ball Lightning – The Key in The 4th Dimension?”.)

It was previously known that bioenergy causes diverse effects; for instance it can alter the solidity of objects (metal bending), changes the electrical characteristics, affects the growth of plants. (These anomalies were described in my book titled “Mysterious Forces?”. Its first publication happened in 1990, the revised version was published in 2004.) My intention was to select a phenomenon that can easily, quickly, cheaply and instantaneously indicates to us the existence and the volume of bioenergy. Therefore I chose a very poorly documented but simple phenomenon: the energy that causes certain light objects to rotate.

The first experiment was performed on five hundred high school students in the following way: water was poured into a Petri dish and the participants had to make the water move without touching the dish or submerging their fingers into the water. The attempts were recorded by video cameras. As a result of this series of experiments we realized that this energy exists for real. The later tests confirmed the existence of this kind of energy.

Henceforth we extended our experiment to the measurement of the electrical conductivity too. It turned out that electrical conductivity can be influenced by bioenergy too. After more than ten years of working and experimenting, by the continuous improvement of the measurement method, we finally succeed in creating a simple, portable, mass manufacturable electronic device that is suitable to measure and document a portion of bioenergy.

In 1993 we established the Egely Research and Development Ltd. to manufacture and distribute the Egely Wheel vitality meter device.

In 1996 I started an experimental and theoretical work in the field of energetics that aims discovery of environment friendly, renewable energy sources. Many educational and technical books of mine tell about these topics (Forbidden Inventions, The Edge of The Razor, Introduction to Field Technology volume 1, 2 & 3).

You can find out more about which cookies we are using or switch them off in settings.

This website uses cookies so that we can provide you with the best user experience possible. Cookie information is stored in your browser and performs functions such as recognising you when you return to our website and helping our team to understand which sections of the website you find most interesting and useful.

Strictly Necessary Cookie should be enabled at all times so that we can save your preferences for cookie settings.

If you disable this cookie, we will not be able to save your preferences. This means that every time you visit this website you will need to enable or disable cookies again.